5 Things Not to Do on Your Next Photoshoot 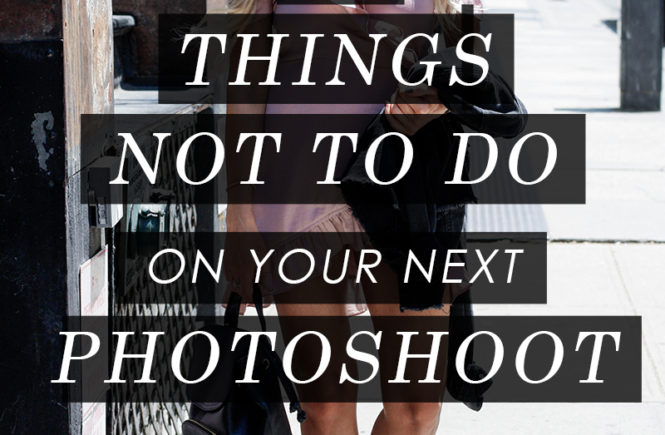 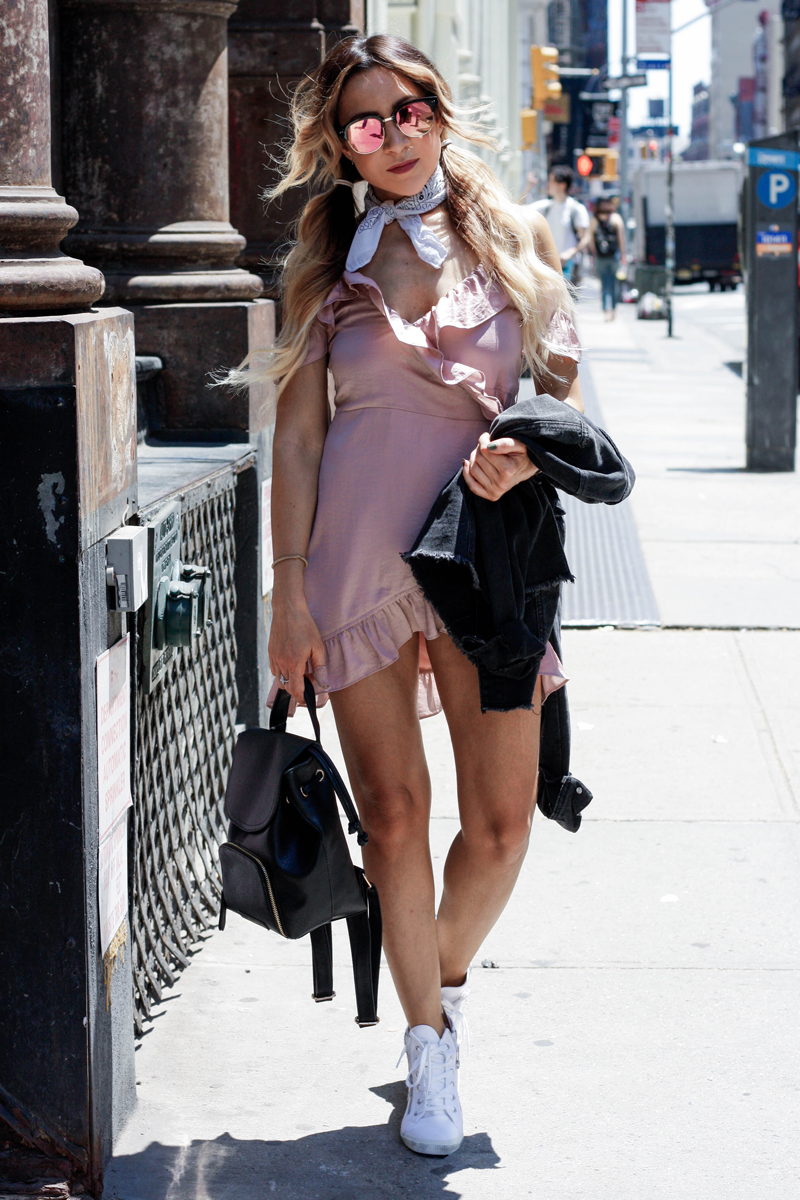 The original plan was to shoot this look in SoHo and get there early, around 8am on a Saturday. Well, due to some unforseen circumstances, we didn’t end up getting there until after NOON. Yes, that’s over 4 hours later. #dontask 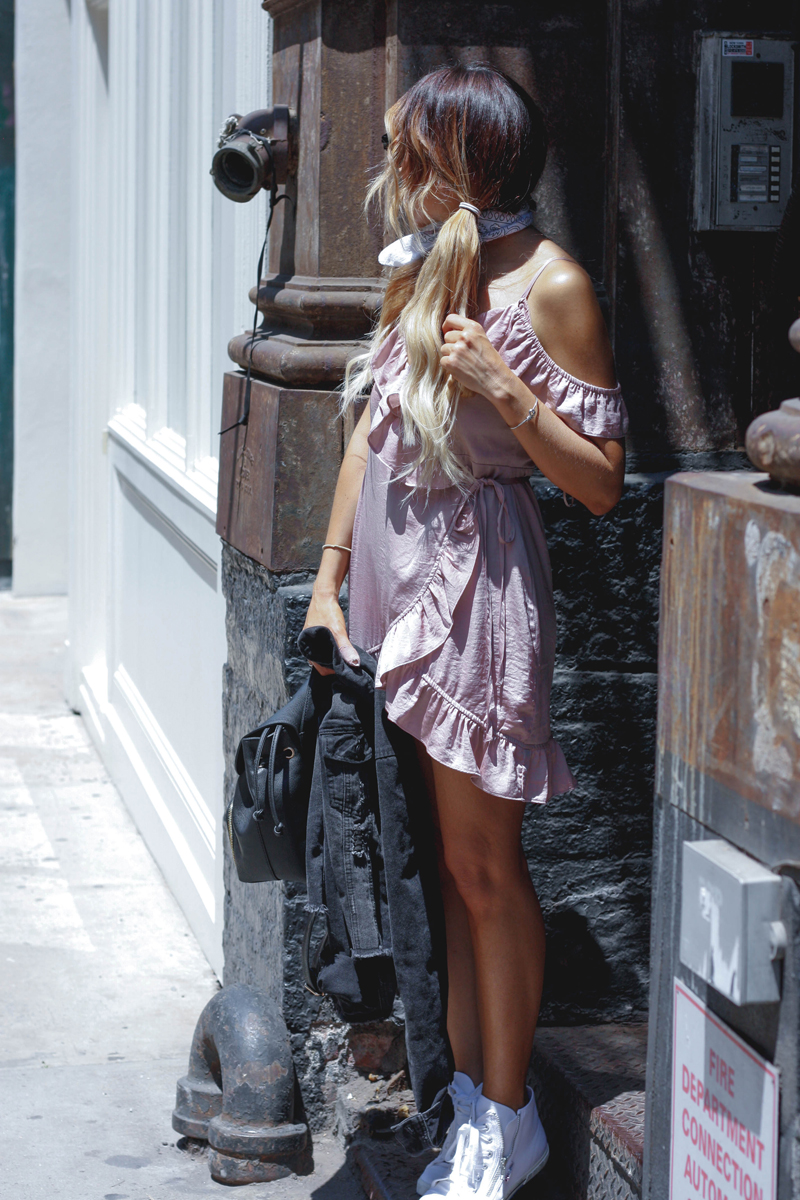 I usually try to avoid doing photoshoots on the weekend, but sometimes you have schedule conflicts (aka your other job) that prevent you from shooting during the week.

It also happened to be the warmest day of the year so far, a cool 93 ° degrees. So, it was sweltering.

And if you know anything about SoHo, the streets are anything but empty at 12pm on a Saturday afternoon…it’s pretty much the exact opposite. 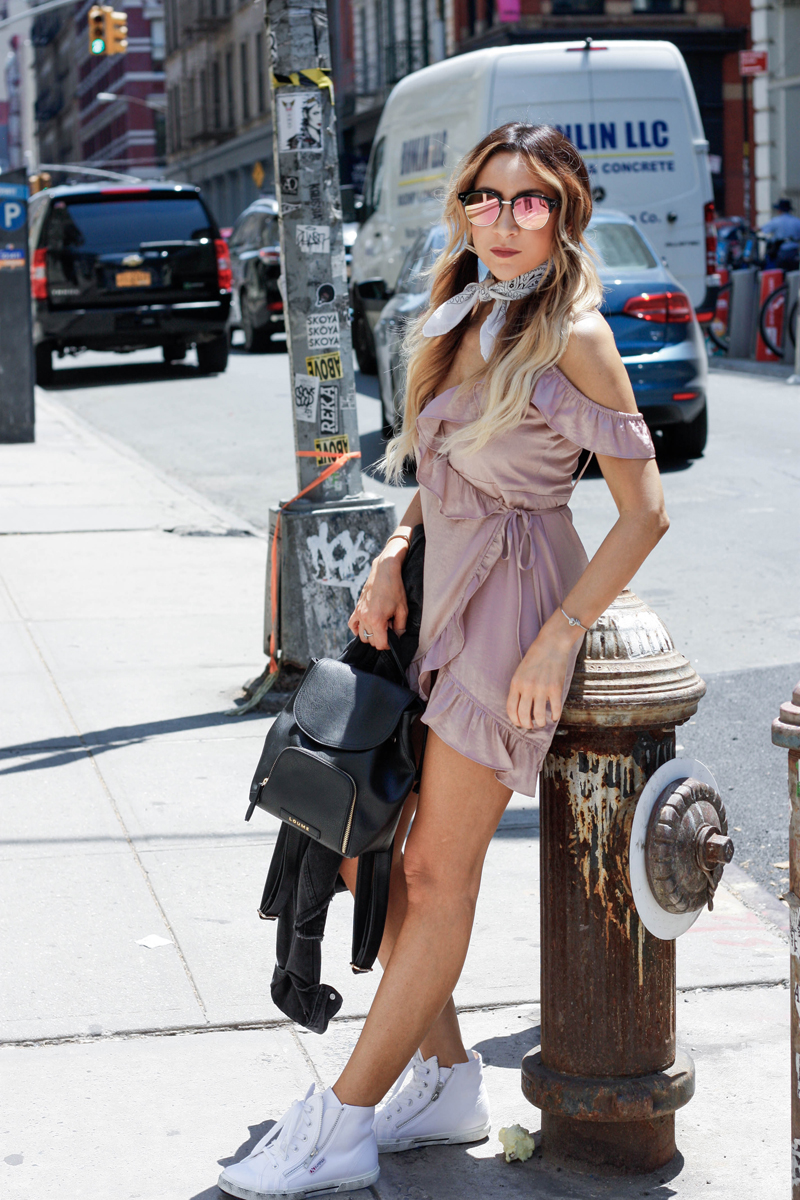 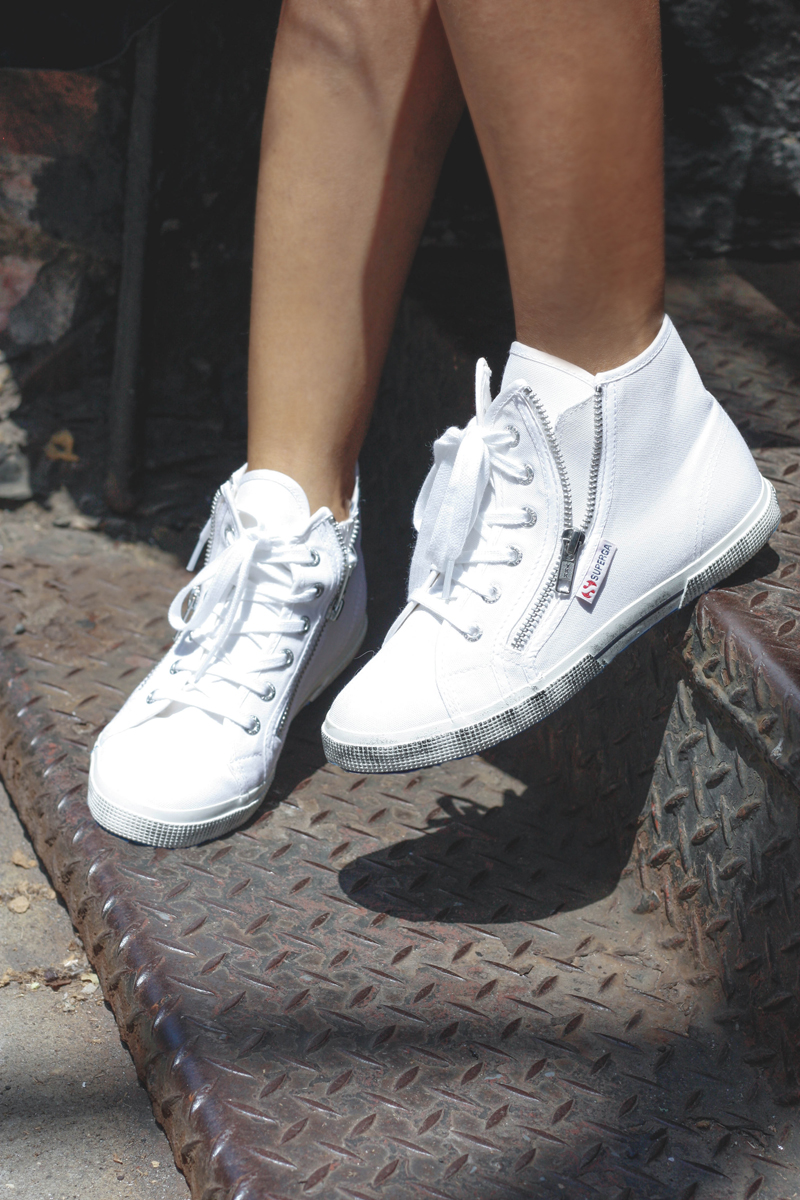 So, the streets were packed with people, the traffic was horrendous, it was sweltering hot, my makeup had melted off, my hair was flat yet frizzy, and the sun was blaring straight on creating the most unsightly shadows on my face. Not to mention I’m pretty sure the camera settings were all wrong here. Oh, and I had a pounding migrane.

Also, please take notice of all the trash on the ground around my feet! We were so frazzled by this point and wanted to get the shots done, that I don’t think I even saw it there. But it’s seriously hysterical to have an eaten apple rind (or whatever that thing is?!) next to your foot in a picture. Haha. I’m sure Superga will appreciate that one. #NOTonbrand 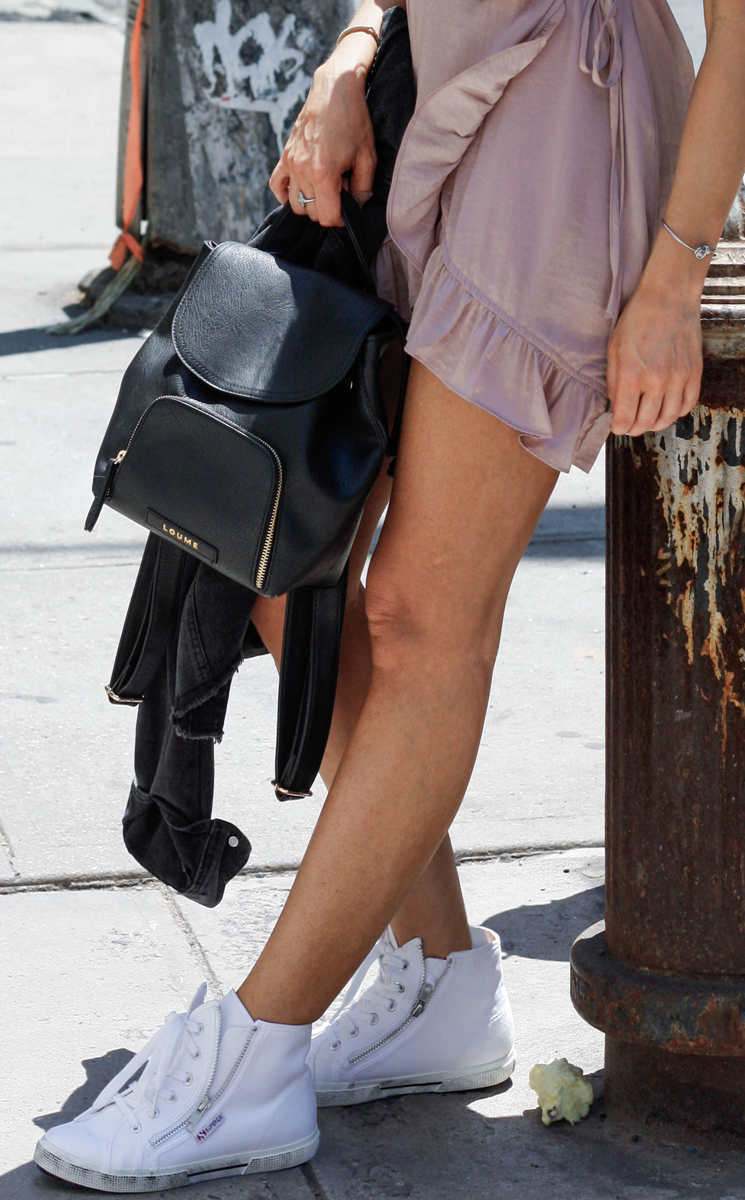 All in all, it was a clusterf*ck nightmare for a blogger and a photoshoot.

But, the photos had to be done, and you gotta do what you gotta do. This was the least crowded street in the area we could find. It unfortunately was not in the shade so we tried all different angles to get the best un-shadowed shots.

I was going to scrap these altogether and redo the shoot, but then I said to myself:

“There is a lesson here. A lesson that can help people and teach them what NOT to do during a photoshoot.”

So, with the help of Lightroom I managed to somewhat salvage what I could and make a few of them look decently presentable. (You may be saying to yourself, “I don’t see anything wrong with them.” And while they aren’t completely terrible right now, these photos were salvaged after hours of editing, bringing up the shadows, decreasing the exposure, etc. in Lightroom. Which is wayyy too much time to be spending on editing!)

The only upside of the day was this adorable wrap dress that I’m wearing from www.tobi.com. It was actually the perfect thing to be wearing on a hot day because the fabric was breezy and actually kept my body cool. Right now Tobi.com is having a sale and the entire site is 50% off, so if you like this dress, hurry on over!

And I can’t forget about these super cool Superga high top sneakers. I am not normally a sneaker kinda gal, but I seriously fell in love with these. They give such an IDGAF vibe to any look, and I love the fact that you can leave the sides unzipped, obviously adding to the IDGAF factor.

So, yeah, now I’m a sneaker convert. One more thing I need to add to my ever expanding closet. 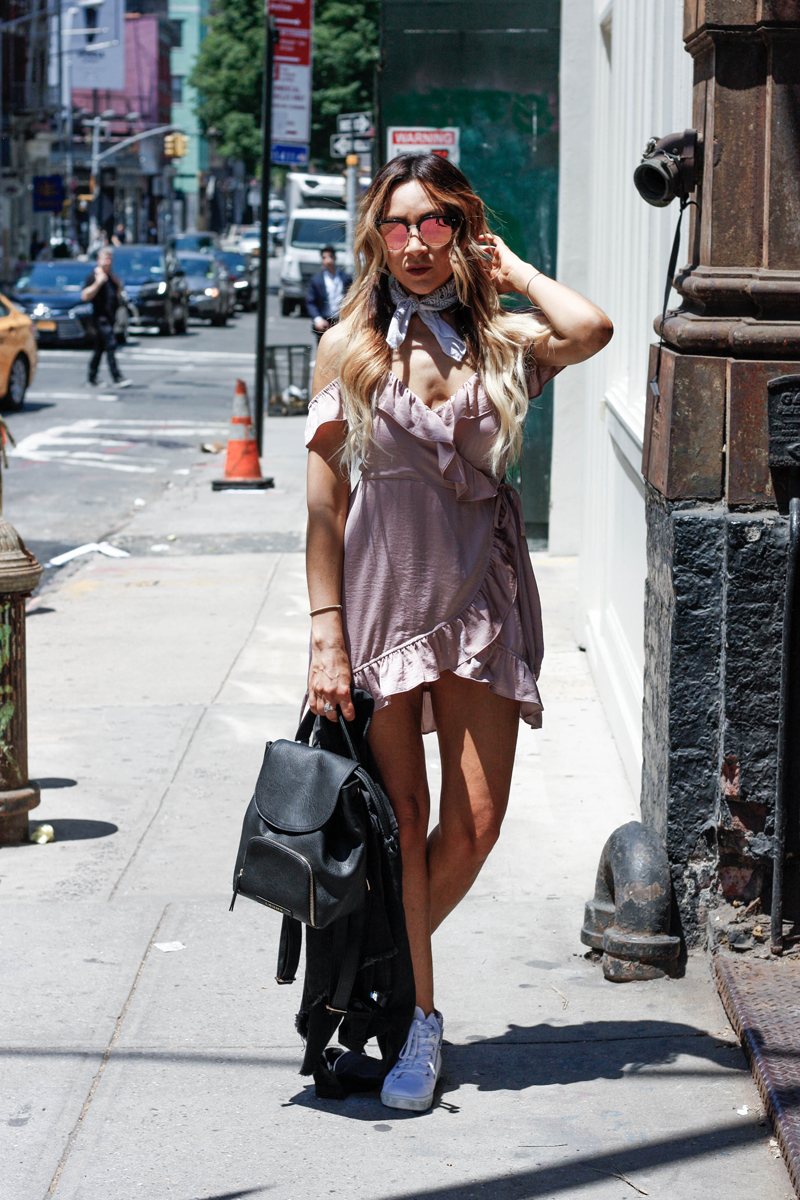 Ok so, back to the photos and what NOT to do on a photoshoot:

Do Not Shoot Shadows

The sun, shadows, and lighting play a huge part in making a successful photo. Please do not go out at high noon and expect to get great pictures because when the sun is directly overhead, this is virtually impossible. If you absolutely must shoot at this time, try to find a spot in the shade, which is ideal on a sunny day to get professional-looking photos without shadows. To avoid this, you could also try out Boca Raton drone photography, which usually limits the view and can add a new perspective to your image. The shadow might still be visible, but it would probably be less noticeable. Apart from that, it could give a fresh new height and angle to your photographs.

Do Not Have Bad Timing

The time of day also plays into getting a decent shot. You should try and aim for early morning before the sun has fully reached it’s peak, OR that time right before sunset, which is what photographers like to call “Magic Hour.” These are the ideal times for photoshoots and when the lighting is best and most even. 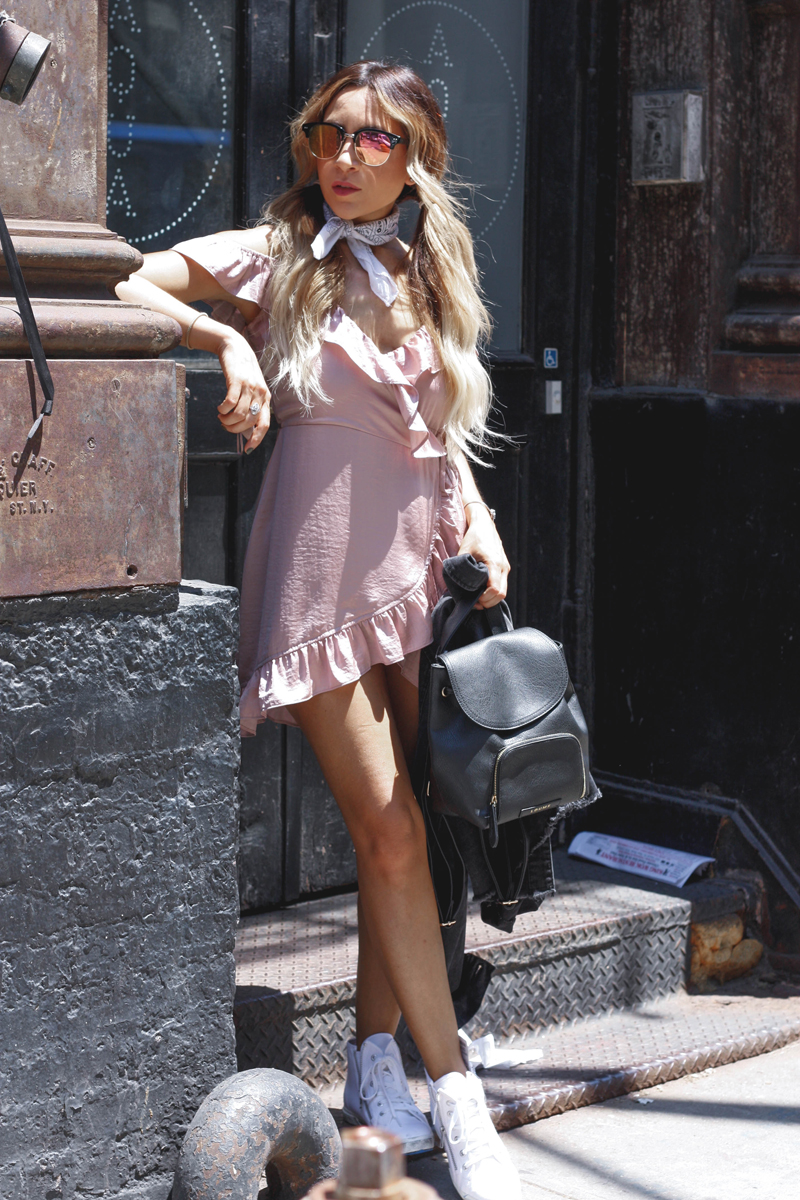 Do Not Shoot the People

When at all possible, try and avoid having pedestrians or other objects in the backgrounds of your photos. This can include people, cars, traffic, etc. These all just create distractions that take away from the beautiful shot you’re trying to showcase.

Well, this can also be made possible by choosing a location that is meant solely for photography and video shoots. To reach one such spot, all you require is a google search that shows film locations for rent in your area. These sites are mostly private and there surely wouldn’t be any distractions, unless asked for. You can shortlist a place, keeping in mind some factors like distance, your budget, and the type of scenes they are offering.

However, if you wish to work within the natural settings, this post is a perfect example of a photoshoot without any background distractions cluttering your vision.

Obviously, at some times this is unpreventable, but another trick is to try and position yourself with a large space between your body and the closest building or structure. For example, instead of shooting the picture straight on while standing with your back against a building, why not step into the sidewalk, turn 90 ° and shoot it the long way down the street. The addition of space behind you will add to the nice blurry background that we’ll hopefully be creating with the next tip. 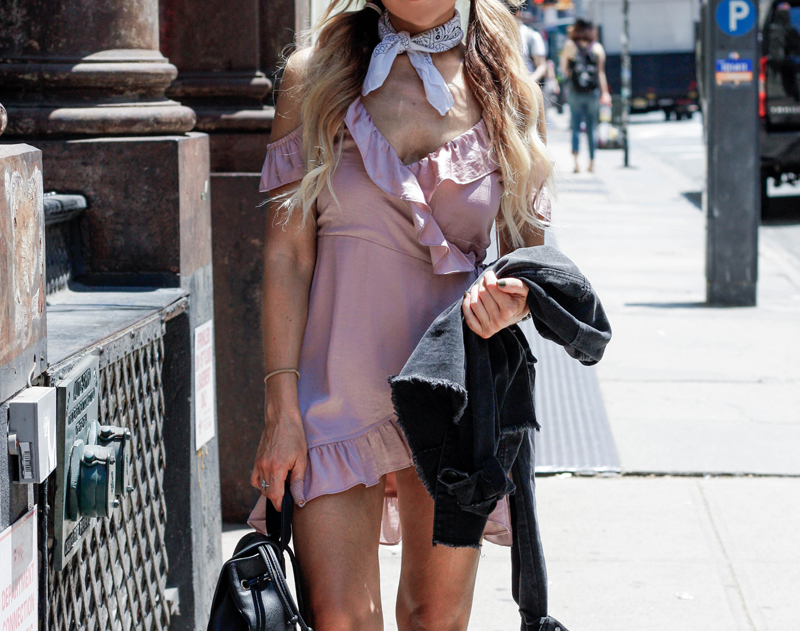 Do Not Use the Wrong Camera Settings

Ok, I am definitely not a professional photographer, but in order to get a nice clear photo with a blurred background, I do know that you need to have the camera on certain settings. I like to shoot with an aperture of 2.8-3.5 and a shutter speed of 1/200 or above. This will ensure a clear focus on the main image (aka YOU), while still blurring the background. (I am pretty sure these were shot with an aperture of 5.0-6.5 which is why the background isn’t as blurry as it could be.)

Sometimes I will also decrease the exposure a notch if I feel the whites are being overexposed and are too bright. 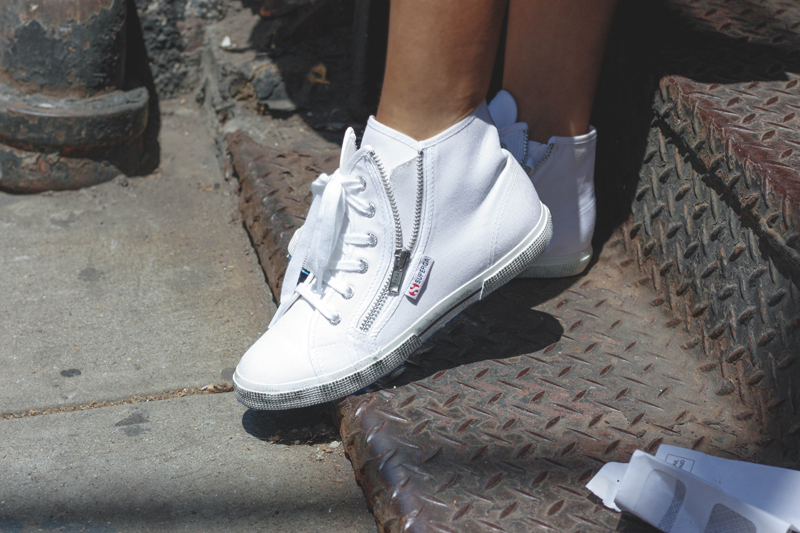 We were so impatient and completely over it by the time we actually got to shoot these pictures, we didn’t take the proper time to “prep” the location.

I’m not talking anything major, but brushing the trash out of the way would’ve been a good start! (aka: the apple rind near the fire hydrant and that crumpled up envelope next to my foot in the above picture, WTF people).

Also, be aware of your surroundings, such as the flow of traffic, which can greatly increase your chances of getting a good photo. If the light is red for a good 2 minutes, use that opportunity to get a clear shot with no background distractions. 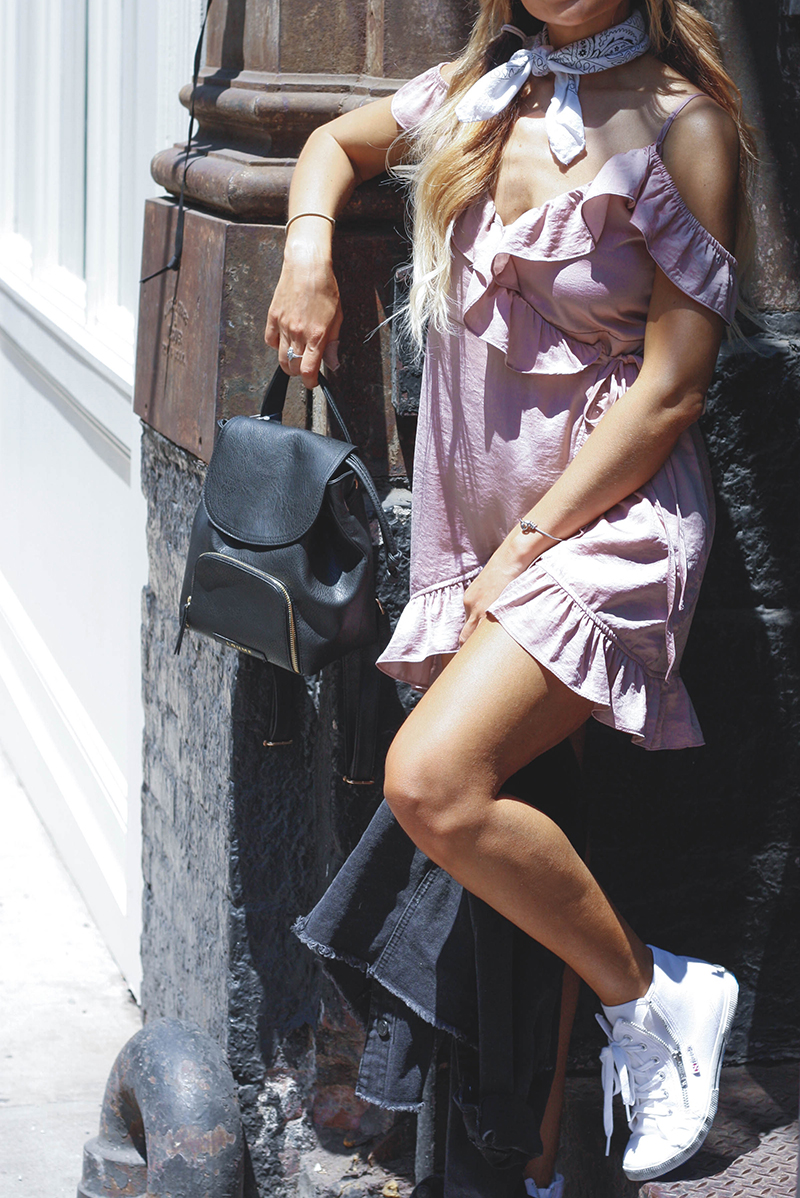 Ok, that’s all my advice on what not to do on a photoshoot. I promise, for the next shoot I’ll get there on time, have lots of patience and do much better for you guys so you can enjoy a higher caliber of pictures (and not have to subject your eyes to any more garbage. Literally.)

If you enjoyed this post, or if you even got one laugh out of my unfortunate mishap, why don’t you sign up for my newsletter? I promise I won’t bombard you with multiple daily emails (only about 1-2x a month).

And finally, I want to thank all of you who follow along with my daily content on my social media channels. Please continue to tag me in your posts, share with your friends, and spread the love! And for those who aren’t following, why don’t you get in on the action? I can be found on: Instagram, Twitter & Pinterest! ? 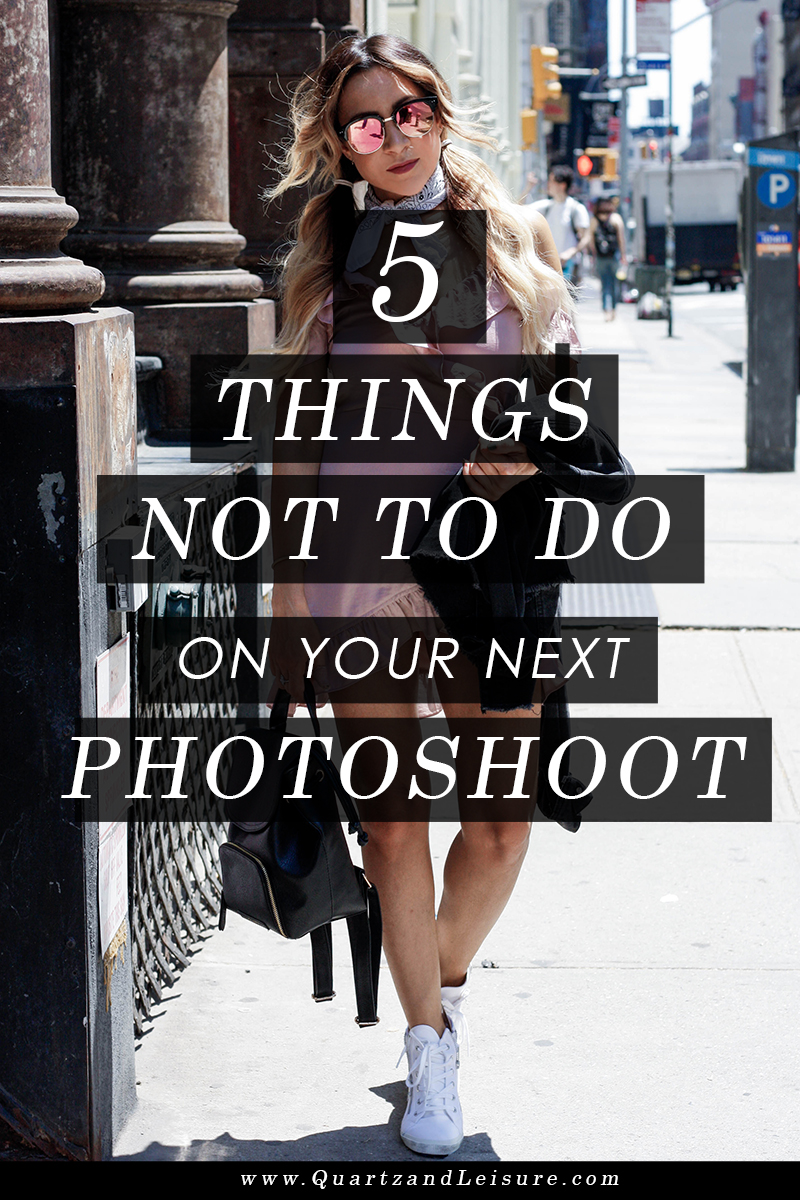 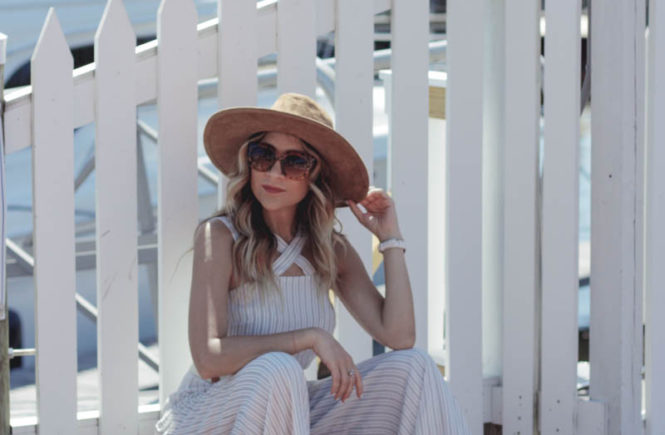 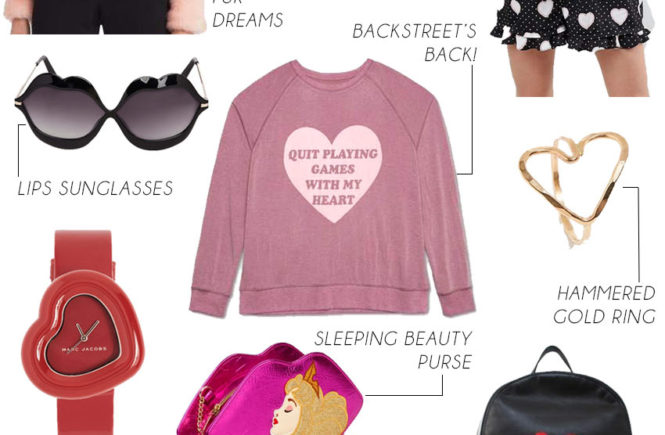 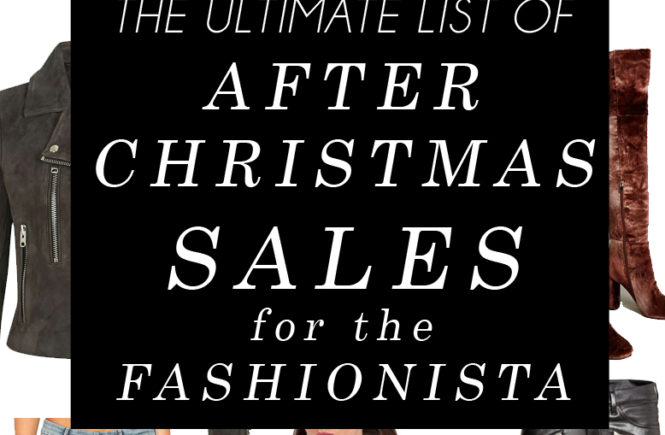 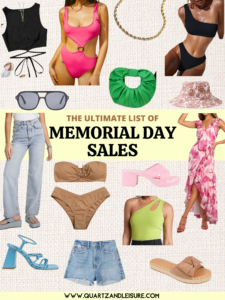 I’m ready for all the holiday parties thanks to

Giving v specific instructions to the barista at t

How I style my favorite trousers from @express for

Almost time to rewatch 😅 How many times have yo

This is how I first realized my camera was broken

Unbox some @pradabeauty with me 💕 #PradaPartner

Found one more from the vacay archives, and THEN w