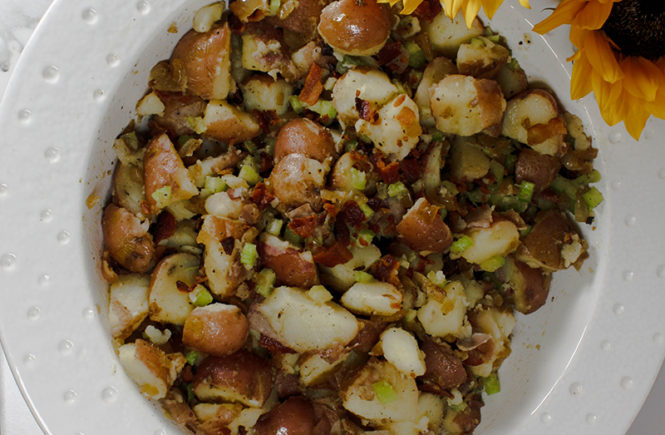 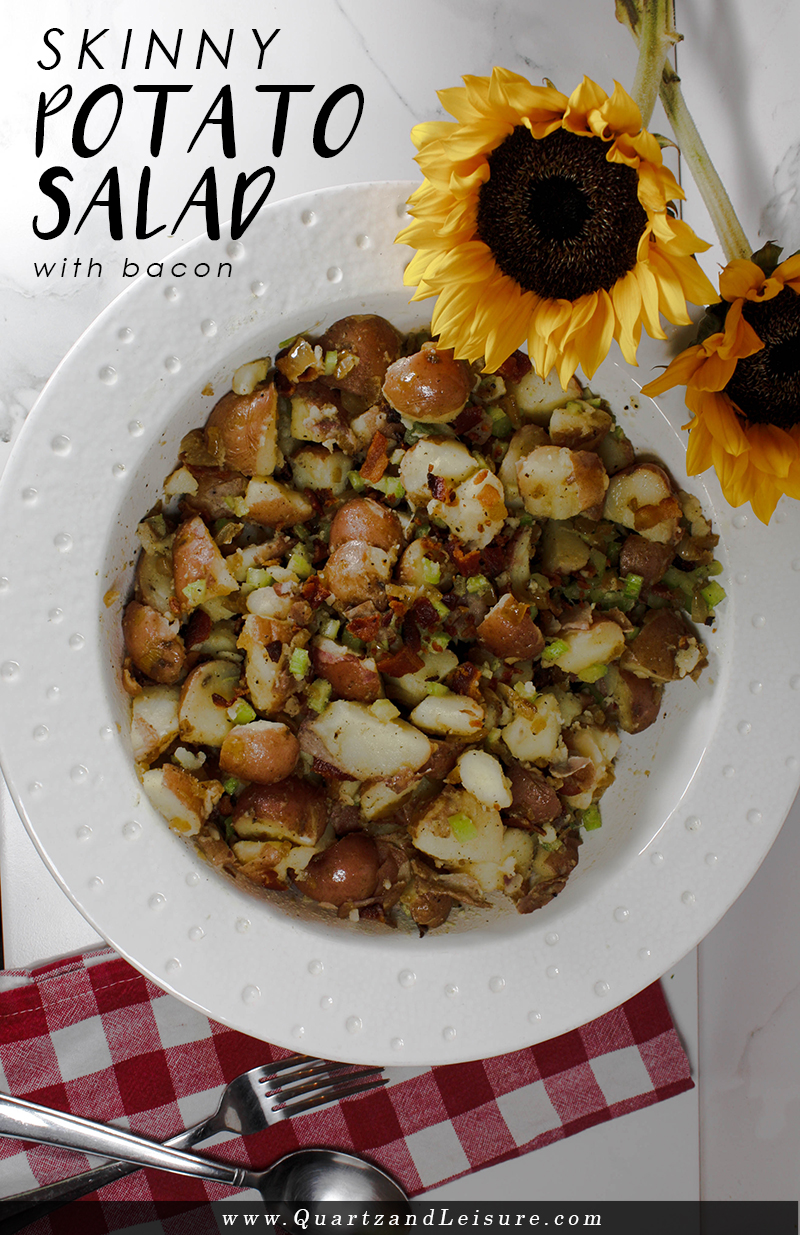 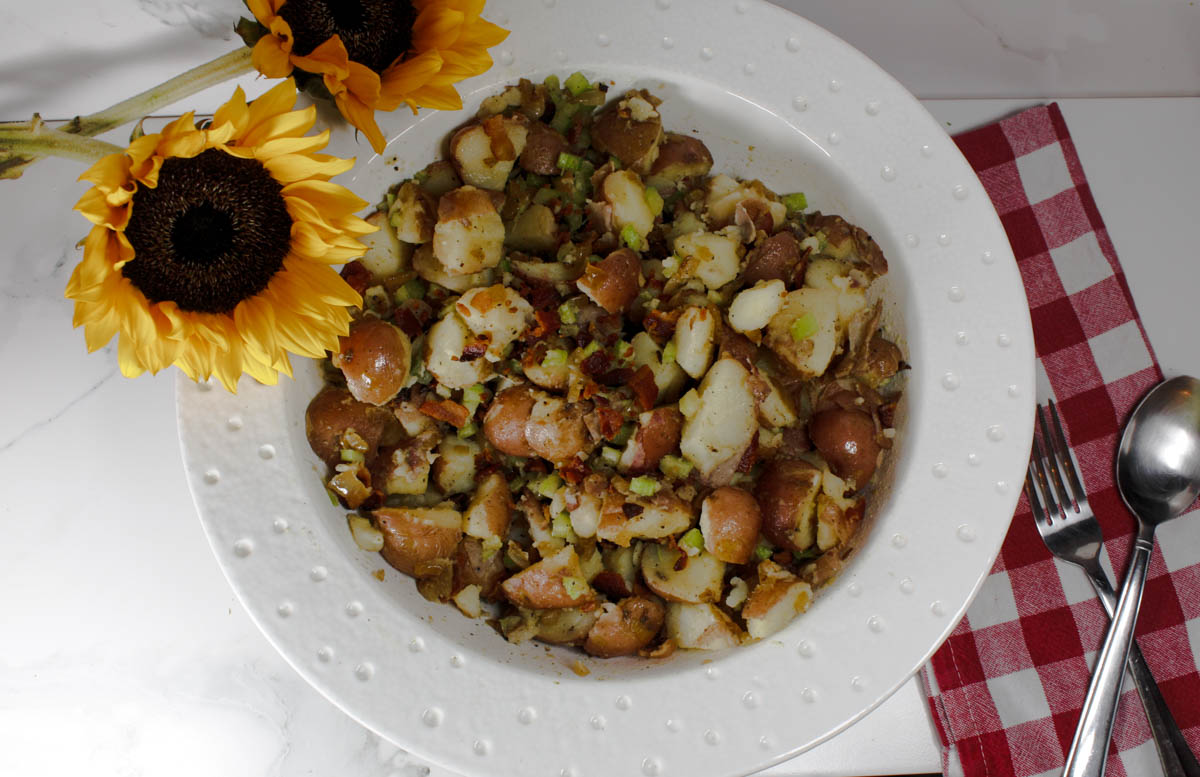 Now that Summer is in full swing, the days are longer, and the weekends are usually jam packed with events, picnics & get togethers. No complaints here!

But, the 4th of July weekend is coming up in less than a week, and the one staple side dish you’ll most likely find at every party is potato salad!

And even though the side dishes take up the majority of my plate at picnics, I do my best to steer clear of the traditional potato salad, as it is jam packed with fat and empty calories from all that mayo.

The recipe I’m showing you today is called skinny potato salad for a reason…it doesn’t contain any mayo, yet still tastes deliciously creamy and flavorful.

Keep reading for the simple recipe below. 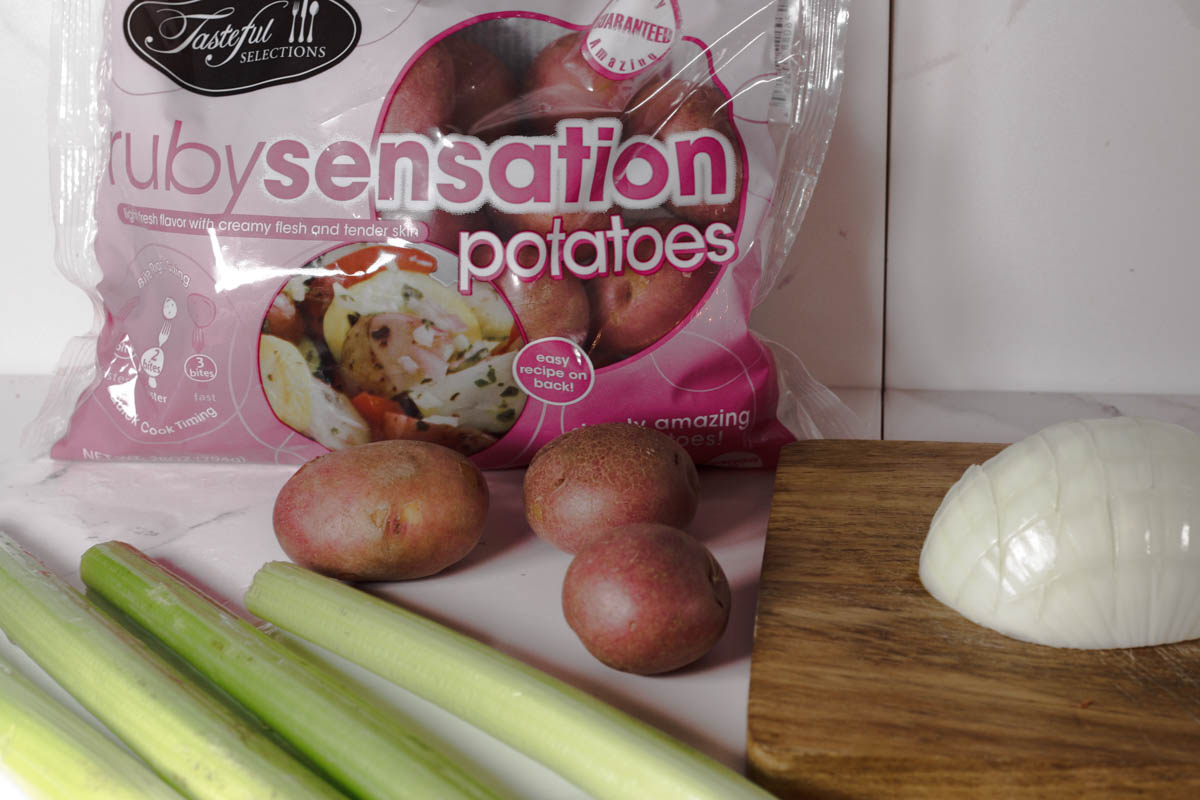 Start the recipe by placing the potatoes in a large pot of boiling water. I always use the red-skinned Ruby Sensation potatoes because they have such a rich, creamy texture naturally, which makes adding any mayo completely unnecessary!

While the potatoes are boiling for about (15 mins), prepare the rest of the ingredients. 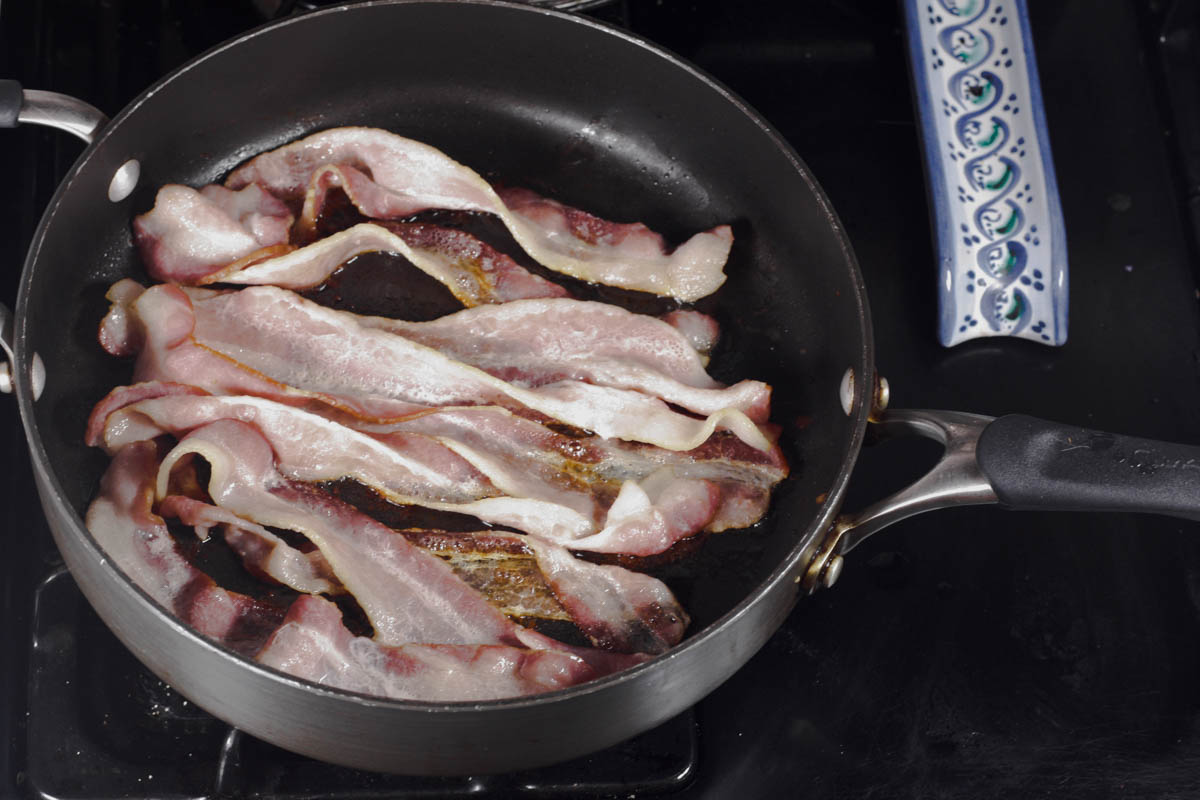 Ok, so the secret to the flavor in this potato salad is BACON. You didn’t think I was going to make a completely fat-free potato salad, did you?!

Take about half a pound (1/2 package or about 10-12 strips) of bacon and cook them on the stove in a large pan. Cook until they are to your desired crispness.

The cooking of the bacon actually brings up a debate: Most people are very opinionated when it comes to cooking bacon. They either like it super crispy/burnt, or very undercooked/almost raw. Which one are you?

Anyway, while the bacon is crisping up, take half a Vidalia onion (the sweetest, most delicious onions!) and dice it up. When the bacon is finished, set the strips aside on paper towels to soak up any excess grease.

Now, add the diced onion to the pan and cook it up in the bacon fat. I told you this is where the flavor comes from in this recipe! Sautee the onions in the pan until they are translucent.

While the onions are cooking, you’ll want to dice up your celery stalks as shown in the photo.

At this time you can also take your cooled bacon strips and break them up into smaller bacon bits. 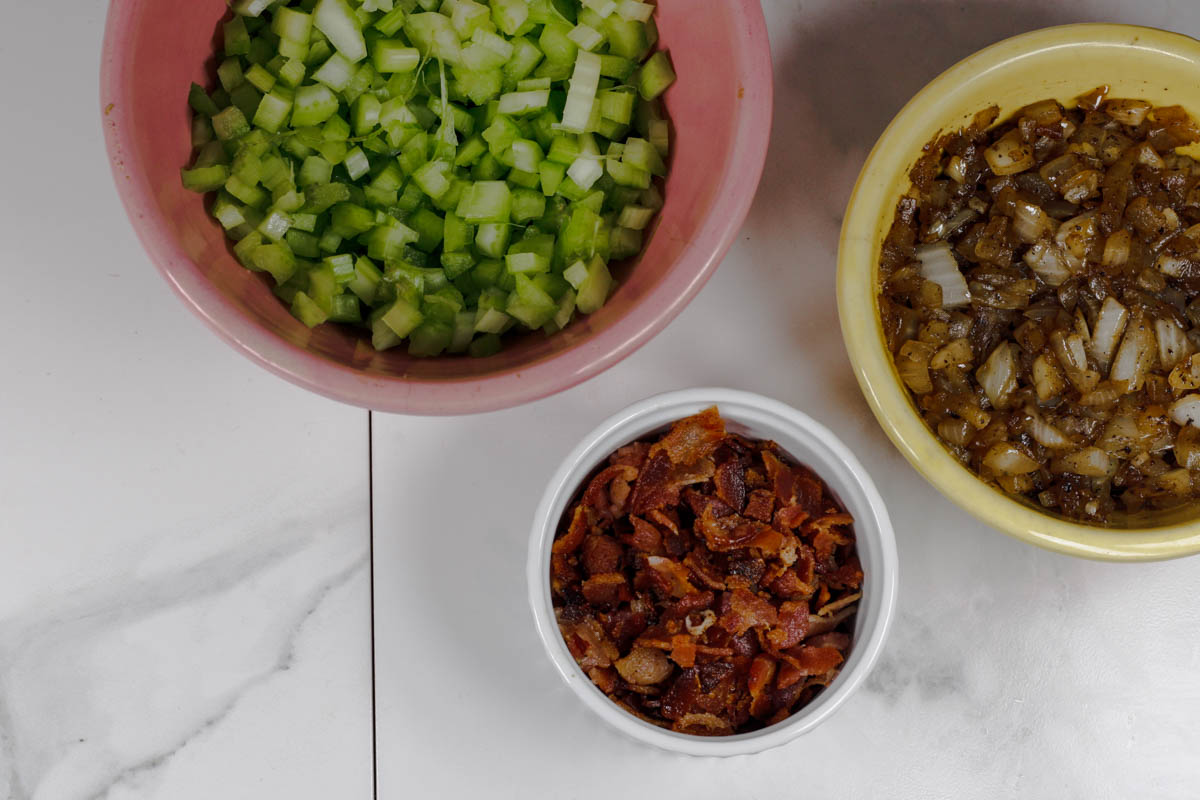 When the potatoes are finished cooking (you’ll know they’re done when you can easily pierce them with a fork), allow them to cool for a few minutes, then cut them up into halves or quarters. Place all of them in a large bowl, big enough to fit all of the remaining ingredients. 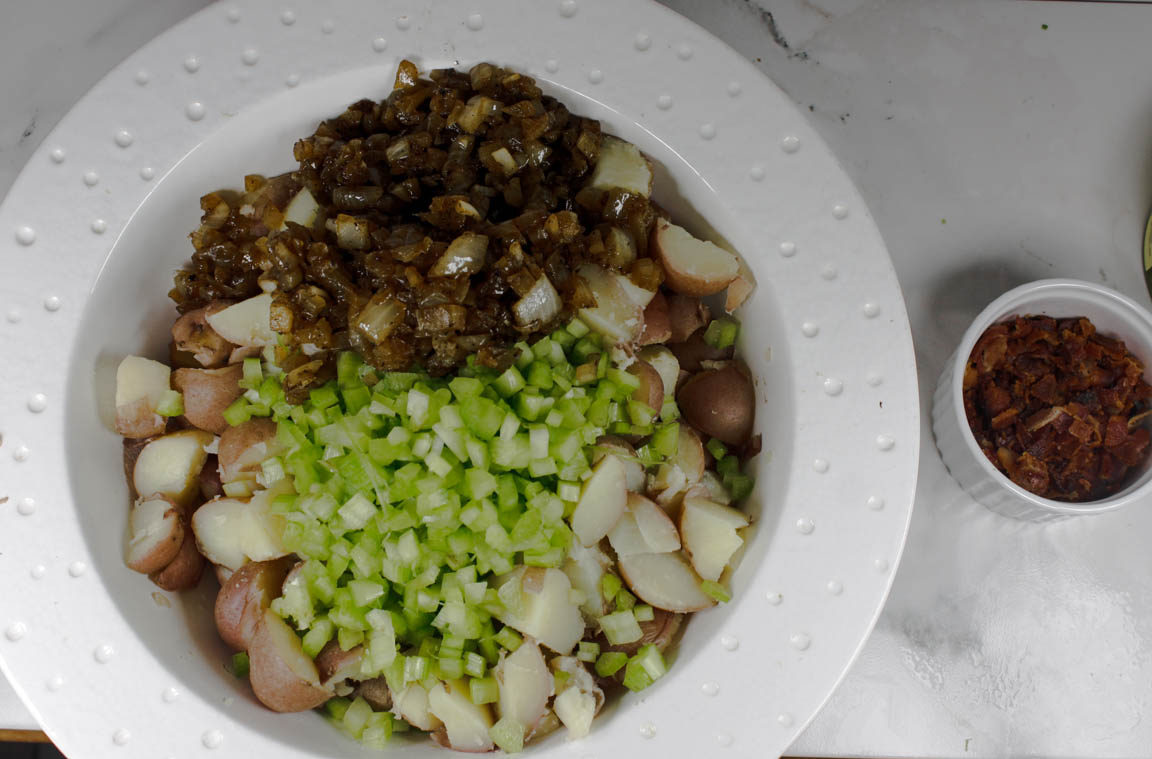 Next, toss the sauteed onions and the celery into the bowl and mix to combine with a large spoon. While you’re stirring, also add in 1/4 cup extra virgin olive oil, the optional 2 tablespoons of vinegar (red wine vinegar or rice vinegar), and salt and pepper to taste.

When everything is mixed, sprinkle the bacon bits throughout and gently stir to combine these in as well.

And that’s it! This potato salad is delicious all on it’s own, and not terribly unhealthy like traditional potato salads can be.

But, if you still feel like you need some creamy white stuff to complete the dish, why not try it with a Greek yogurt dipping sauce? Simply combine plain Greek yogurt with some lemon juice, minced garlic, chopped dill, and a pinch of salt. 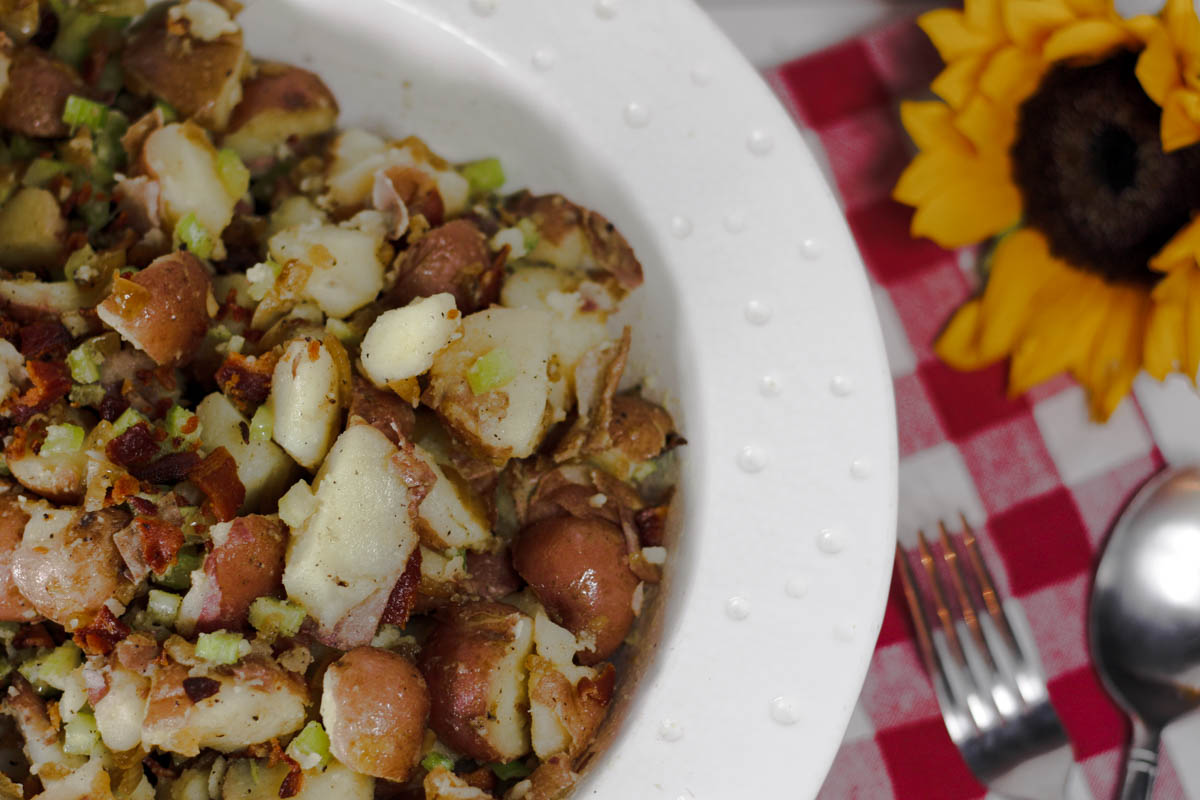 If you end up trying this for the 4th of July, please let me know in the comments below, or by tagging me in your pics on social media!

And if you enjoyed this post, why don’t you sign up for my newsletter? I promise I won’t bombard you with multiple daily emails (only about 1-2x a month).

Keep reading below for the condensed recipe and instructions! 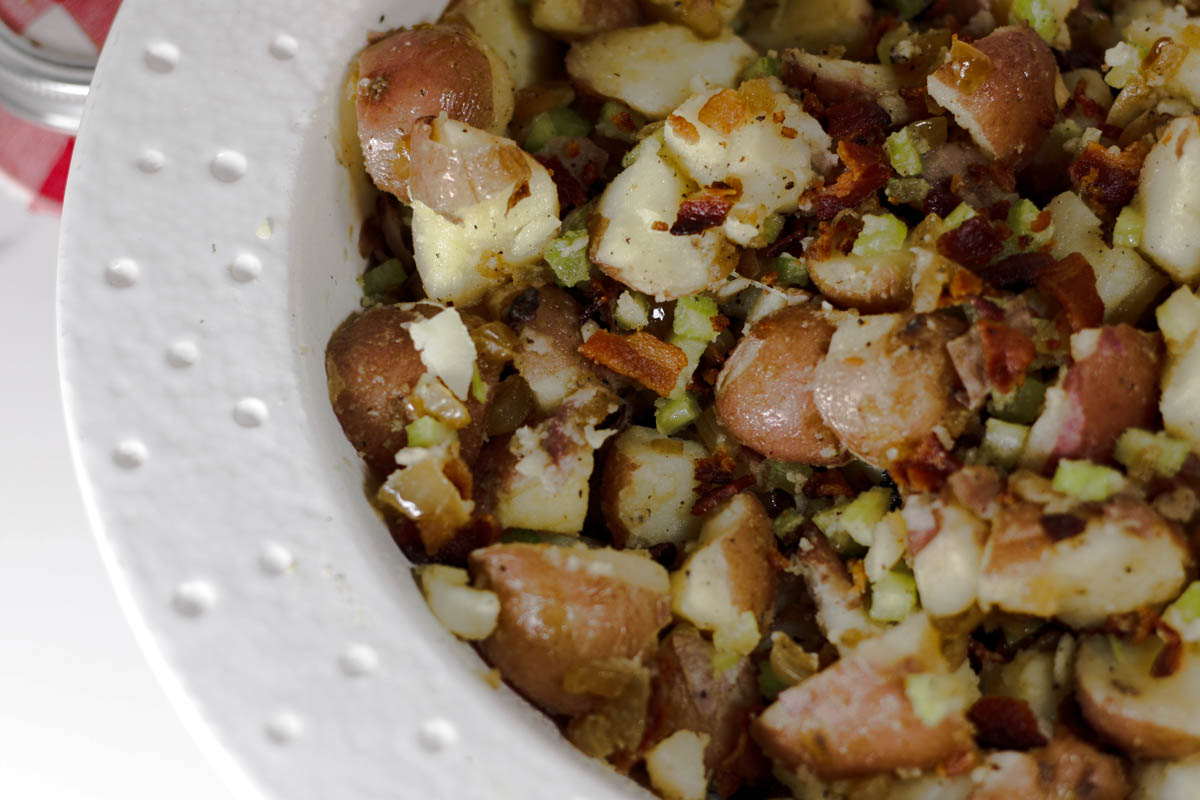 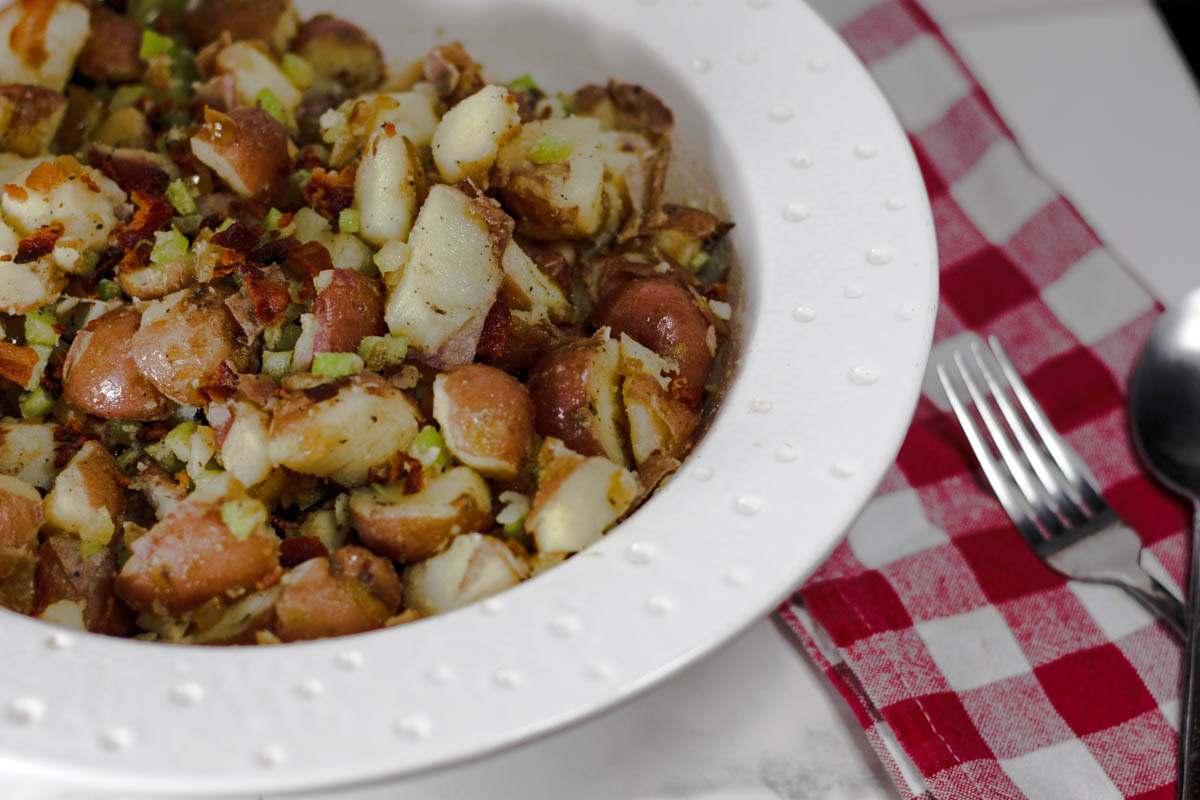 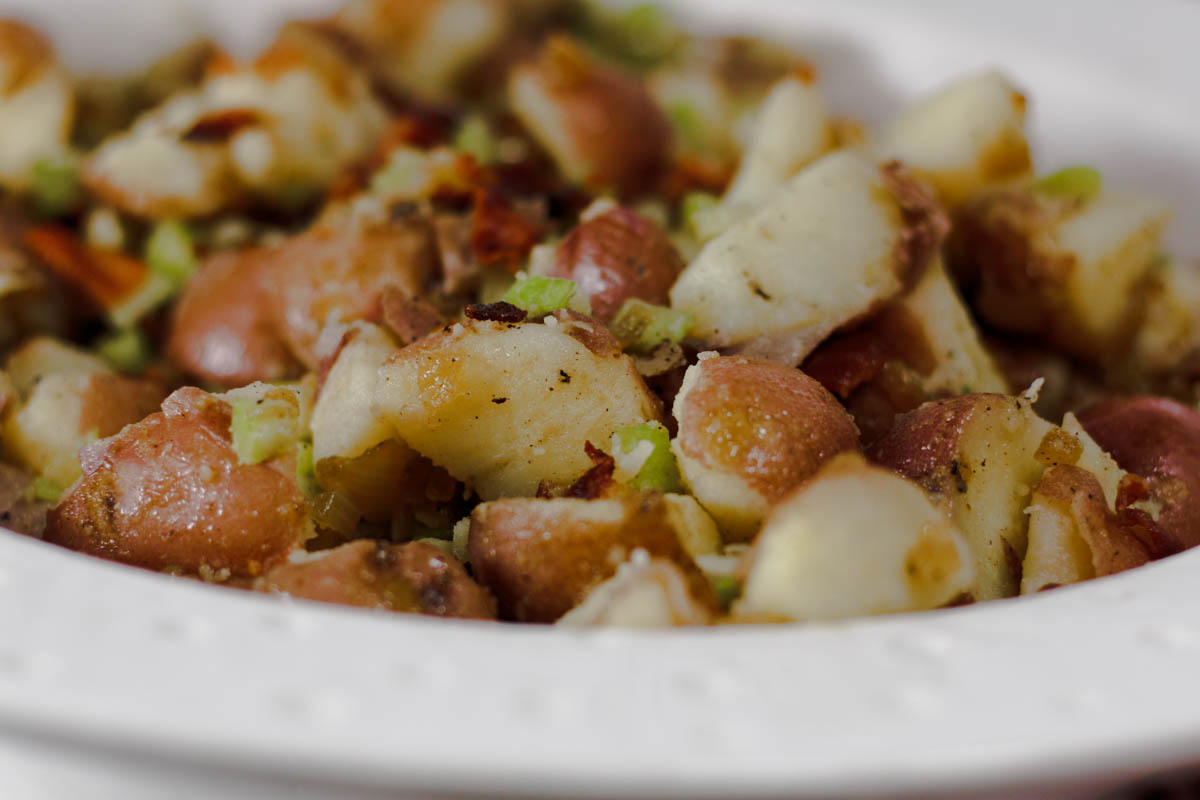 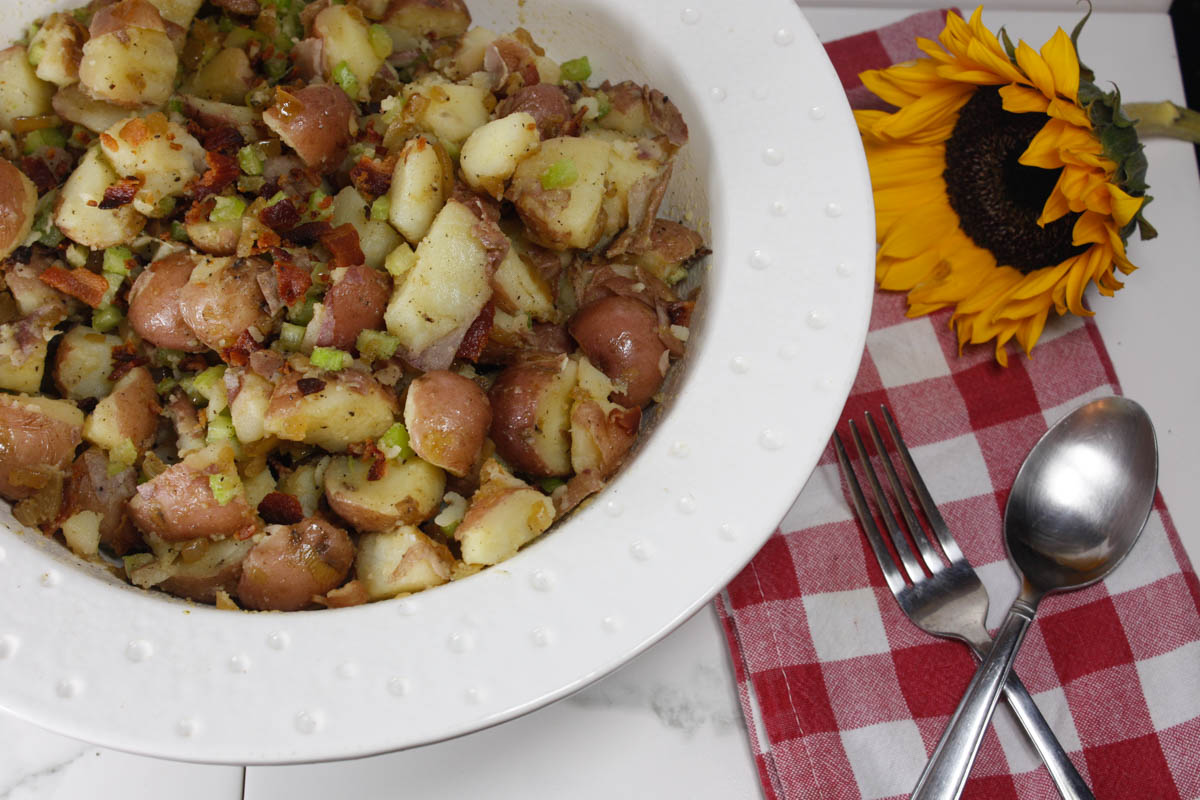 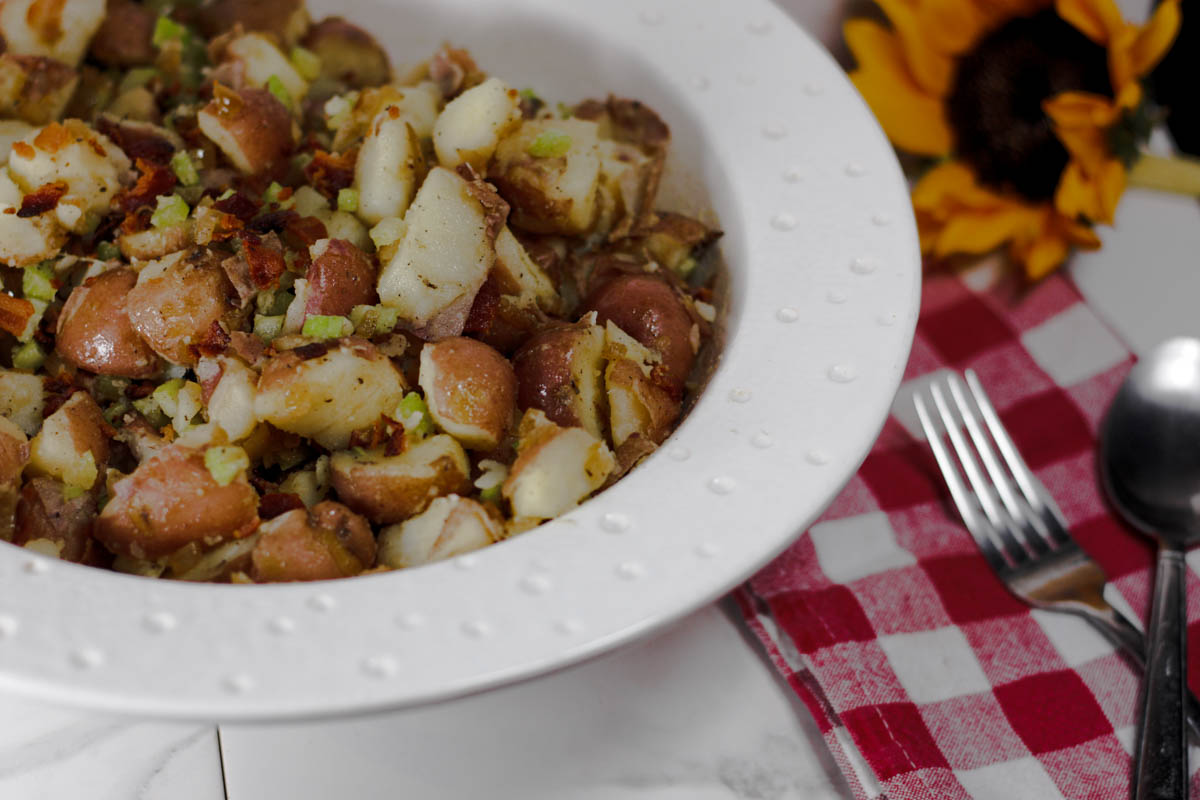 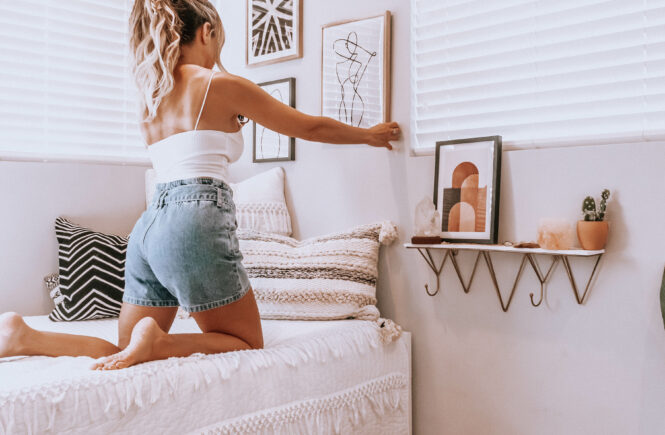 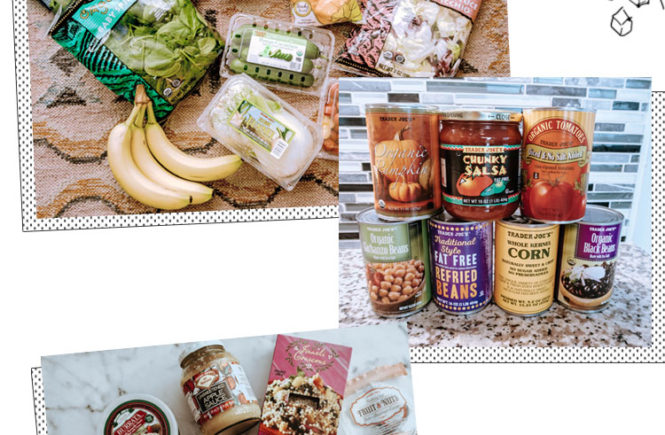 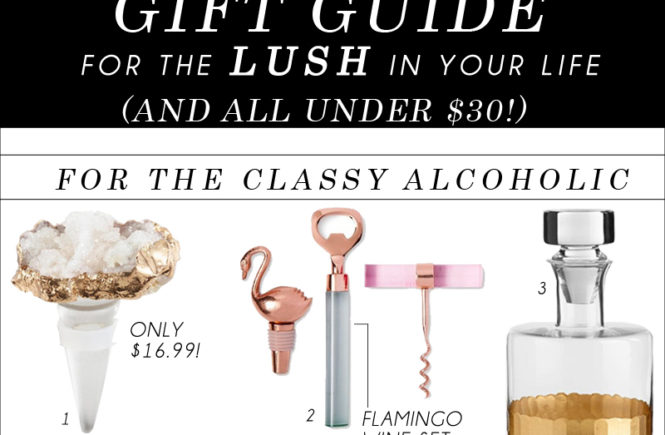 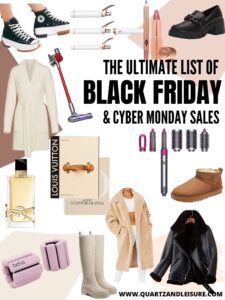 Summer’s not over yet! 💥💜 New swirly nails